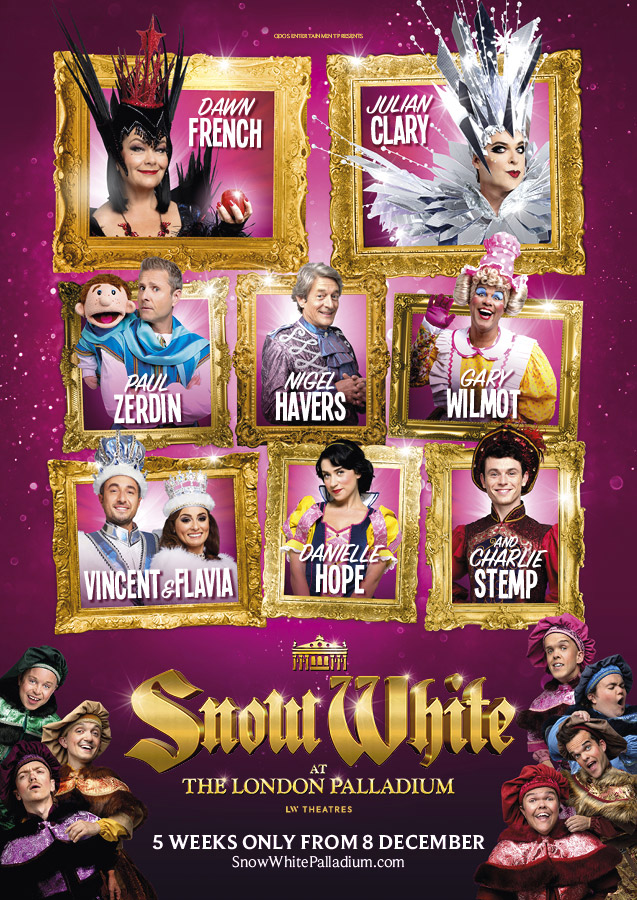 Qdos Entertainment today (12 October 2018) announced that Charlie Stemp will return to the London Palladium to play The Prince in this year’s Pantomime, Snow White at the London Palladium along with Danielle Hope who will play the title role of Snow White.  They join the previously announced Dawn  French as The Wicked Queen, Julian Clary as The Man in The Mirror, Paul Zerdin as Muddles, Nigel Havers as The Understudy, Gary Wilmot as Mrs Crumble with Vincent and Flavia as The King and The Queen for this strictly limited 5 week run.

Performances of Snow White at the London Palladium begin on Saturday 8 December 2018 with Gala Night on 12 December with the run concluding on Sunday 13 January 2019.

Award-winning Charlie Stemp most recently played Barnaby Tucker opposite Bette Midler and Bernadette Peters in the Broadway production of Hello, Dolly! and has recently been announced to play Bert in Cameron Mackintosh’s forthcoming West End production of Mary Poppins.  He previously played the title role in last year’s Palladium pantomime Dick Whittington, following his critically acclaimed performance as Arthur Kipps in Half a Sixpence at the Nöel Coward Theatre, a role he first performed at Chichester Festival Theatre.  His further theatre credits include Wicked at the Apollo Victoria and the international tour of Mamma Mia!

Danielle Hope is best known for having won BBC 1’s Over the Rainbow, which lead to her professional theatre debut in the lead role of Dorothy in Andrew Lloyd Webber’s production of The Wizard Of Oz at the London Palladium. Since then, she has starred as Éponine in the West End production of Les Misérables, as Maria in the UK tour of The Sound of Music, as Sandy in the recent UK tour Grease and is currently playing Sherrie in the UK tour of Rock of Ages.

Actor, writer and comedian Dawn French, who is making her pantomime debut as The Wicked Queen, is an original member of The Comic Strip and one half of the comedy duo French and Saunders.   She was last on the West End stage in October 2016 in her critically acclaimed one woman show 30 Million Minutes at the Vaudeville Theatre.  Her previous stage credits include A Midsummer Night’s Dream, An Evening with French and Saunders, French and Saunders Live, French and Saunders Still Alive, Le Fille du Regiment, Side by Side by Sondheim, Silly Cow, When I was a Girl I Used to Scream and Shout and Smaller.  Her extensive television credits include Delicious, Little Big Shots, The Wrong Mans, Roger and Val Have Just Got In, Girls on Top, Jam and Jerusalem, Lark Rise to Candleford, Let Them Eat Cake and the multi award-winning BBC comedy The Vicar of Dibley.  Her film credits include Coraline, Harry Potter and the Prisoner of Azkaban, Maybe Baby and Milk.  Her best-selling books include Dear Fatty, A Tiny Bit Marvellous, Oh Dear Silvia, According To Yes and Me. You. A Diary.

Julian Clary returns to the London Palladium for the third year following his triumphant successes as The Spirit of the Bells in Dick Whittington and Dandini in Cinderella.  His television debut came in 1989 with ITV quiz show Trick or Treat and Channel 4’s Sticky Moments.  Clary is a best-selling author, a regular panelist on BBC Radio 4’s Just a Minute and in 2016 toured with his one man show The Joy of Mincing and in 2017 was seen in Le Grand Mort at the Trafalgar Studios.

Ventriloquist Paul Zerdin took the US by storm when he won America’s Got Talent, which was swiftly followed by his own residency at Planet Hollywood in Las Vegas.  In the UK, Zerdin has appeared on The Royal Variety Performance, was seen on Michael McIntyre’s Big Christmas Show and has previously appeared at the Palladium as Idle Jack in Dick Whittington and as Buttons in Cinderella.

Nigel Havers’ film credits include Chariots of Fire, Passage to India and Empire of The Sun. His many television credits include Coronation Street, Downton Abbey, The Life of Rock and Benidorm and his numerous West End appearances include Art, The Importance of Being Earnest touring productions of Rebecca, Single Spies and Basket Case.  Havers played Captain Nigel in Dick Whittington and Lord Chamberlain in Cinderella, both at the London Palladium.

Gary Wilmot’s multiple theatre credits include last year’s Palladium pantomime Dick Whittington, The Wind in the Willows also at the London Palladium, Big The Musical for the Theatre Royal Plymouth, Dirty Rotten Scoundrels at the Savoy Theatre and on UK tour, The Pajama Game at the Shaftesbury Theatre, Chitty Chitty Bang Bang at the London Palladium, Copacabana at the Prince of Wales Theatre, Carmen Jones at the Old Vic, Pirates of Penzance for Regent’s Park Theatre and Me and My Girl at the Aldephi Theatre.

Vincent Simone and Flavia Cacace-Mistry are one of the country’s most successful Ballroom, Latin American and Argentine Tango performers and choreographers.  After competing successfully together for many years, they gained a strong following after joining BBC’s Strictly Come Dancing in 2005.  Since leaving the show, they have starred in and co-choreographed productions including Midnight Tango, Dance ’til Dawn and The Last Tango.