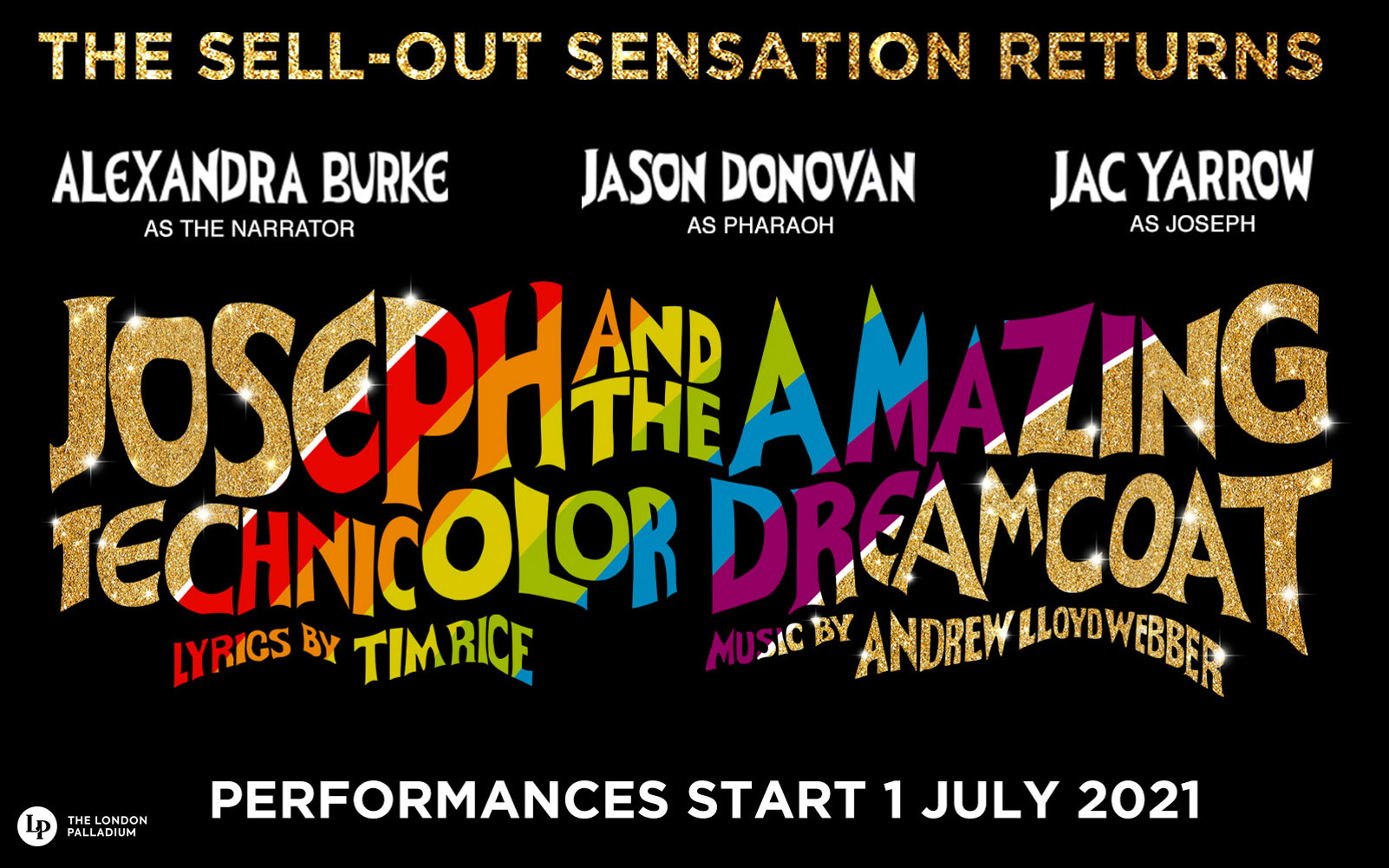 Jason Donovan returns to the role of Pharaoh

Michael Harrison and the Really Useful Group are delighted to announce today that Alexandra Burke will return to the West End this summer in the new production of Joseph and the Amazing Technicolor Dreamcoat, as Andrew Lloyd Webber and Tim Rice’s legendary musical gets ready for a strictly limited season at the iconic London Palladium.

The production will begin performances on Thursday 1 July (Gala Night: Thursday 15 July) and will be one of the highlights in the return of theatre to the UK cultural landscape.

Alexandra Burke will play The Narrator in the celebrated musical. Her many West End credits include the lead roles in The Bodyguard, Sister Act, Chess and Chicago. Alexandra first rose to fame winning The X-Factor in 2008, and has since gone on to sell over 5 million records.

Jason Donovan will return in the role of Pharaoh. He was originally in the show when he made his defining stage performance as the title character of Joseph in the 1990s, in a sold-out 18-month run which produced a No.1 single and best-selling soundtrack album. Jason raised the roof of the London Palladium in 2019 as Pharaoh, who rocks ‘Song of the King’ in the iconic musical by Tim Rice and Andrew Lloyd Webber.

Jac Yarrow caused a sensation when he made his professional stage debut playing Joseph, following in the footsteps of a line of stars who have previously played the title character. His portrayal of Joseph won him unanimous acclaim and an Olivier Award nomination, with his rendition of ‘Close Every Door To Me’ regularly stopping the show with standing ovations.

The production will begin live performances on Thursday 1 July, after the proposed “Step Four” in the Government’s roadmap to easing restrictions, and therefore is planning to accommodate full-capacity audiences in accordance with the intended lifting of all limits on social contact.

Michael Harrison said: “The legendary song says “Any Dream Will Do”, but my dream for the past 12 months has been to bring our smash hit production of JOSEPH back to its spiritual home, The London Palladium. I’m thrilled that dream will soon become a reality.

There is no better show than JOSEPH to unite audiences and bring joy and happiness to the West End this summer. The London Palladium is a very special theatre and JOSEPH is a very special musical. We have a brilliant cast ready to get back on stage and an army of theatre makers ready to return to the jobs they miss so much. GO! GO! GO! JOSEPH!”

Joseph and the Amazing Technicolor Dreamcoat enjoyed a completely sold out season in 2019. Audiences and critics were unanimous in their acclaim for the legendary musical – the first major collaboration by Tim Rice and Andrew Lloyd Webber – as it returned to the London Palladium.

Joseph and the Amazing Technicolor Dreamcoat will be directed by Laurence Connor. Laurence’s credits include the acclaimed London production of School of Rock and the Tony-Award nominated production on Broadway, the recent London productions of Miss Saigon and Chess, the international arena tour of Jesus Christ Superstar and he is also the Co-Director of the new version of Les Misérables which has enjoyed worldwide success including Broadway, UK and US tours. He is the director of Andrew Lloyd Webber’s new production of Cinderella, which also opens this July at the Gillian Lynne Theatre.

Laurence will be joined on the creative team by Choreographer JoAnn M Hunter (who has 20 Broadway shows to her credit, including School of Rock and On A Clear Day You Can See Forever), the award-winning Morgan Large who will design the set and costumes, Lighting Designer Ben Cracknell and Sound Designer Gareth Owen.

Released as a concept album in 1969, the stage version of Joseph and the Amazing Technicolor Dreamcoat has become one of the world’s most beloved family musicals. The multi-award-winning show, which began life as a small-scale school concert, has been performed hundreds of thousands of times including multiple runs in the West End and on Broadway, international number one tours, and productions in over 80 countries as far afield as Austria and Zimbabwe and from Israel to Peru! The show features songs that have gone on to become pop and musical theatre standards, including Any Dream Will Do, Close Every Door To Me, Jacob and Sons, There’s One More Angel In Heaven and Go Go Go Joseph.

Told entirely through song with the help of the Narrator, Joseph and the Amazing Technicolor Dreamcoat follows the story of Jacob’s favourite son Joseph and his eleven brothers. After being sold into hardship by the brothers, he ingratiates himself with Egyptian noble Potiphar, but ends up in jail after refusing the advances of Potiphar’s wife. While imprisoned, Joseph discovers his ability to interpret dreams, and he soon finds himself in front of the mighty but troubled showman, the Pharaoh. As Joseph strives to resolve Egypt’s famine, he becomes Pharaoh’s right-hand man and eventually reunites with his family.

Joseph and the Amazing Technicolor Dreamcoat is produced by Michael Harrison.

Michael Harrison and the production of Joseph and the Amazing Technicolor Dreamcoat continue to call for a government-backed insurance scheme to properly support the re-opening of the theatre industry.

Alexandra Burke will not be appearing in every performance. Please check the website for all details.

From £20 (£10 in Previews)
On General Sale
Pay no booking fees at www.josephthemusical.com